Following the demise of the developers Gladedale, there is now a new owner of the site which they have purchased with the existing planning permission attached.

The original planning permission, pushed through by the conservatives on Elmbridge Council, included a hotel and a care home. For several years, Molesey Residents Association Councillors in conjunction with the Hampton Court Rescue Campaign have spent enormous amounts of time and energy in ensuring that Gladedale complied with all the pre-conditions necessary prior to any construction commencing. Without this legitimate challenge via the planning process a very unsuitable and unsympathetic development could be there now.

The MRA has continually argued for a sympathetic development on the Jolly Boatman/Station site, one in line with the character of Molesey and one that is to stand opposite a major national treasure.

We understand that the new owners are considering all the options available to them – which range from commencing construction to the original plans through to putting in another planning application.

Residents can be assured that the MRA will continue to advocate for a sympathetic and appropriately scaled development on the site.  In particular the provision of a percentage of affordable housing within the development. 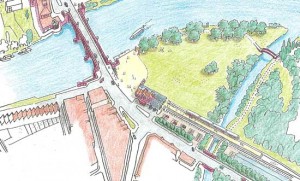 An aerial view of the Jolly Boatman Site 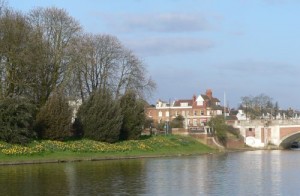